A word with… Kris Tucker

“It’s not about existing, it’s about living again.”

They include sitting on the Western Sydney Local Health District Consumer Council, being the consumer Co-Chair of the NSW Health ‘Elevating the human experience- Culture and staff experience’ enabler group and sitting on the ‘Emergency department patient experience program’.

We’ve talked to him about his experience and his journey to becoming a health consumer representative.

Kris, can you explain to me what happened to you when you had your stroke? And how long ago did it happen?

In 2011, I had a brain bleed and was admitted to the hospital for two weeks. They put a coil into my groin to get into the brain to seal up an aneurism.

Six months later, an angiogram showed that the aneurysm had grown to a giant 10 centimetres, and I had to have brain surgery. The problem was that it was very close to my basilar artery. Doctors said the risks are too great to operate on.

I finally found a professor who was willing to do it and I went in for surgery on 5 September 2012.

They cut my head open to get to the aneurysm but during the surgery, my basilar artery burst and that caused a stroke. I was put into a coma and woke up a week later. I couldn’t move anything on my left side. This is nine years ago.

I’m very sorry this happened to you Kris. That must have turned your world upside down. If you think back nine years ago, what was your strongest emotion at that time?

When I had the angiogram, I was 43. I had just been promoted at work. And then, during the surgery, that stroke, and my ex-wife had to call my work to say, “Sorry, he can’t come to work because he is in hospital and had a stroke.”…

At that time, I was quite depressed. Everything I’d known for the last 40 years was gone. I could no longer drive because I lost my peripheral vision on the left-hand side. I was stuck at home alone and couldn’t see my children. It’s been a long hard road.

That is a blow that would put anybody to their knees. What made you change your mindset?

There’s no simple answer. I started writing a guide for people who experience a similar situation, and it was a cathartic exercise for me. Trying to put down in writing what happened. I have also recorded the things that I have found to make a difference along my journey. The whole point is, always keep going forward, a marathon starts with one step.

Why did you want to try to help others in the same or similar situation with your guide?

When I first had my stroke, any reference material I found was all aimed at doctors, or it’s aimed at people over 70.

I thought it would be nice to have something that is practical. There are people who are on the same journey as me. I’ve got some learning to share. And it may or may not work for you, but it’s worth trying. It’s better to focus on helping others than focus on your own misery.

What is the biggest piece of advice you would give to somebody in a similar situation that you have been in and still are?

Always look forward, never back. If you’re making one step of progress in the right direction, even if it’s tiny, it’s still progress. It’s important to keep going forward.

The doctors told my ex-wife, my children and myself at the time that I was incontinent and that I would never recover continence function again. I would never walk, talk, or swallow again.

And what are you doing now Kris?

I’m able to do all of this now. But the point is, doctors must think about having empathy for their patients and putting themselves in their position.

Don’t go and kill our hope straightaway. I understand that we need the facts. But healthcare professionals also need to remember: You must have some hope. Otherwise, there’s no point in living. It’s not about existing it’s about living again.

And how did you find that hope? 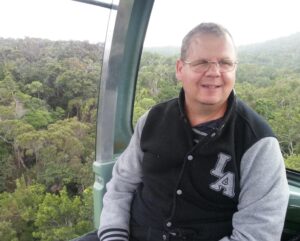 Everything I have done in the last nine years is just trying to make my life easier. As Stephen Hawking said, no matter how difficult life is, and your circumstances are, there is always something you can do and succeed at.

So, what I’m doing now is occupy myself. I’m volunteering on Consumer Councils and use my lived experience to make a difference… these types of things. Work together to improve what they’re doing.

I’ve just finished working on the NSW Health Excellence Awards. I was one of the markers. The submissions we received were incredible. That was so impressive. Thoughtful, empathetic, and simple solutions to creating better outcomes by not investing huge amounts of money, just doing things differently.

Finally, what would you say to somebody with lived experience – whatever that might be – who is sitting on the fence about whether they want to become a half consumer representative or not?

I would absolutely encourage them to get involved because your life is not ending, you’re not there to just exist.

I could have very likely died during my operation, but I didn’t. I don’t want to ‘just’ exist; I want to live. But more importantly, I want to help other people as much as I can from my experience, and becoming a health consumer representative is a perfect way to do it.

If you would like to get in touch with Kris directly you can email him at tuckerkris46@gmail.com. He is happy to talk to you if you have gone through a similar experience to him.